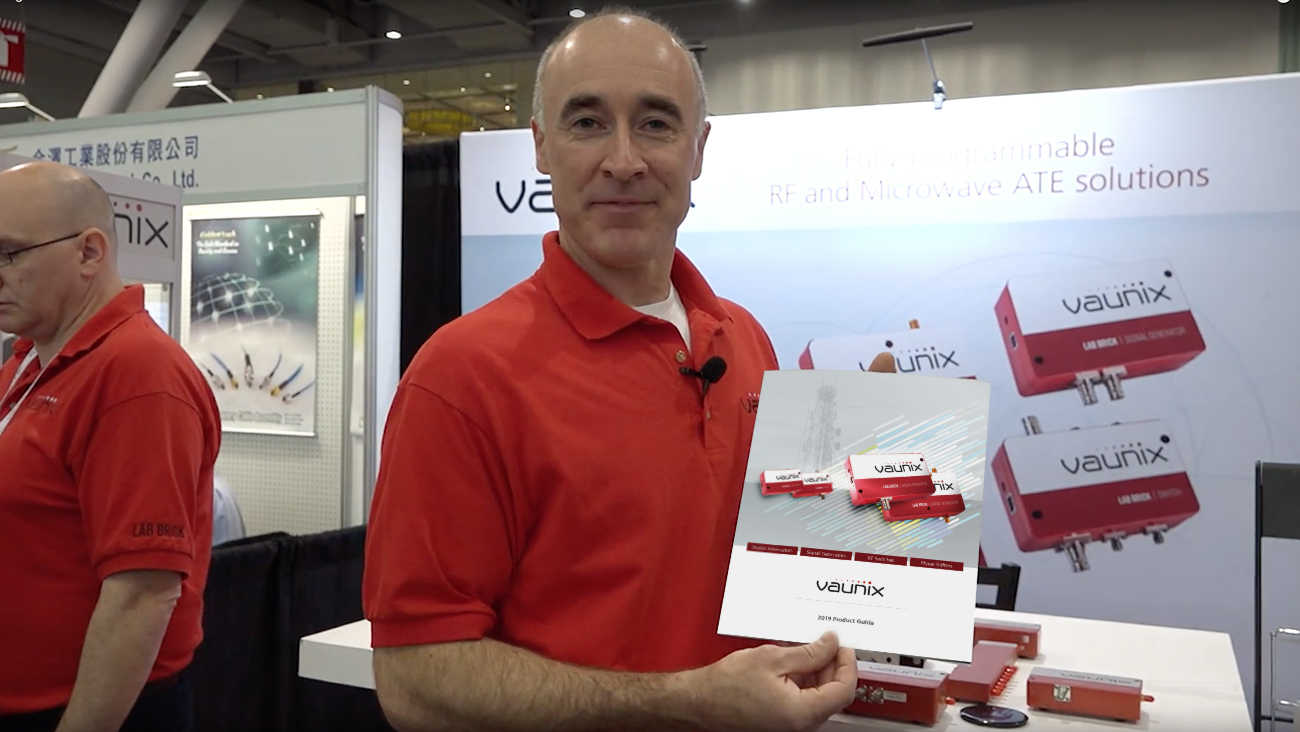 This interview was conducted by David Strand and was recorded August 27, 2019 with Scott Blanchard, President of Vaunix Technology Corp., designers and manufacturers of the Lab Brick line of portable and programmable RF/microwave and wireless test devices and equipment. In this interview, Scott talks about Vaunix’s customers’ use and deployment of their line of digital RF phase shifters.

David: I'm here with Scott Blanchard of Vaunix, and we’re going to talk about Lab Brick RF phase shifters and their use in beam steering and MIMO fading simulation applications. Hi, Scott.”

David: “Scott, you make a product in your Lab Brick line, RF phase shifters. What are you finding people are using them for?

Scott: “So, one of the main applications is beam steering antennas. They’re adjusting the phase on each of the multitude of antennas that might have patch antennas and so forth, or they may have 8 or 16 antennas and they want direction, you know, basically direct the antenna beam. So, some of the users are building up concepts. It’s not so much production units or field-applied units as it is for a concept they’re working on in a lab. They’ll set up 16 phase shifters on each of these antennas and work on beam steering of the different sectors.

David: “Is there a particular frequency band that you find people are working in the most?”

Scott: “The most common phase shifter model we sell operates at four to eight gig. But we see one to two and two to four gig bands are very active as well.

David: “What are the challenges you think they’re encountering, where your lab bricks are a novel approach as opposed to someone else’s solution that may not be programmable, or what have you?”

Scott: “Yeah. I mean, it’s really the simplicity of using our products and ease of programming them… the fact that you plug them into a USB port. You don't have to hook up digital bits that some of our competitors use, you know, they have a TTL interface, where the controlling individual bits for ours you use a graphical user interface or the APIs and you can control the exact phase that you want to achieve whether it’s one degree or 12 degrees or 322 degrees. It’s just set it and you’re there.”

David: “So, what is one of the top features of your phase shifters that you think people are really drawn to other than the programmability?”

David: “And that’s important because… “

Scott: “Just to get the accuracy. If you want to be at any specific phase, you know what frequency you’re operating at, the lab bricks are calibrated across the frequency and across the dynamic range of the unit.”

David: “Is it allowing them to do anything [unique]? I know that that equates to a better resolution of the signal, but what about ultimately in a system, are they getting some sort of a better range or better distance as well because of that accuracy?”

Scott: I would imagine, I don't know this distinctly, but I would imagine you’re allowing, with that kind of accuracy, you’re able to steer more directly or pinpoint your accuracy of your antennas.

David: Earlier you mentioned that there was another application in the wireless realm, What’s that?

Scott: “That would be in fading simulations or, you know, or use with attenuators to control the phase and attenuation of MIMO-type systems, Wi-Fi cellular applications. So if, you know, a user wants to test out their chipset for how it reacts to not only just the amplitude changing that we normally do with our attenuators, but some of the more sophisticated customers are putting in phase change per ports so they can also see how that reacts with their chipsets over, you know, for the Wi-Fi and all the different MIMO channels whether it’s a three by three MIMO or four by four, you know, you name it, you can change all the… whether it stays and attenuation. You can do both with our products.”

David: “Great. And is that a common thing, people integrating the phase shifter or lab brick attenuators with other lab brick products?”

David: “And what about integrated units? You guys are also offering the opportunity to have people come to you to have a custom-built to rack unit and to integrate all these products into one unit?”

Scott: “Yeah, so we got into the game of doing full rack units where we can combine, switches, splitters, attenuators, phase shifters, so you can combine that all into rack mount chassis for easily integratable rack mounts, very customizable.”

Dave: “Great, great. Hey, thanks Scott. I know you’re a smaller company compared to some of the big players, and I know that out there that’s always a benefit to people when they pick up the phone. Can they call you directly?”

Scott: “Call me directly at Vaunix. I’m usually the one to answer the phone.”

David: “That’s awesome. Thanks, and your email address is again?”

David: “Perfect. Well, thanks Scott. I appreciate it. “

To learn more about our entire line of phase shifters, please visit our Phase Shifter page or download our new Product Guide.