Precision Signal Generation: A Marvel of RF and Digital Engineering 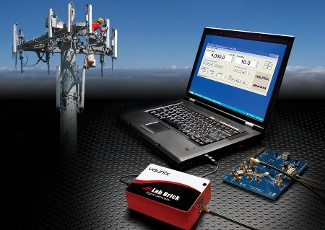 Today’s high-end benchtop vector signal generators are a marvel of RF and digital engineering. They’re generally considered the standard by which all others should be judged. While this may be true in terms of their versatility and sheer range of capabilities, it’s possible today to build a low-cost instrument smaller than a paperback book and weighing less than a pound whose core specifications are surprisingly close to those of larger portable instruments and even some benchtop units.

The Vaunix LSG and LMS Lab Brick Series signal generator are terrific examples. With models ranging in frequency up to 20 GHz, RF output to +20 dBm, SSB phase noise at 10 kHz from the carrier as low as -105 dBc/Hz, and spurious rejection of -80 dBc, their performance is more typical of the real bricks of the instrument world. They’re supported by digital attenuators with attenuation range from 31.5 dB to 120 dB in 0.5-dB steps with accuracy of +/-0.3 dB+5%, 360-deg. phase shifters that are programmable in 1 deg. steps with resolution of 1 deg., and SPDT and 4PDT solid-state switches handle 10 W, have insertion loss of 4 dB or less, input IP3 of +60 dBm, and switching speed of 90 ns or less.

Why does this matter? Because in applications for which these instruments are generally used, electrical performance, ruggedness, reliability, and connectivity are the things that really matter. In an ATE system for example, where they’re programmed and controlled by USB, they can seamlessly integrate with other instruments 10 times the size and cost while delivering all the measurement performance required by the application.

If they’re used in the field as a CW or pulse source with a laptop computer as the user interface along with our simple but comprehensive software and (once again) connected via USB, their size and weight advantages are an enormous benefit. Just ask anyone who spends his or her time trudging up to mountaintop transmission sites laden with several equipment cases. The benefits are, indeed, “priceless.” A whole package including the laptop, attenuator, phase shifter, and switch (remember, they’re 5-VDC USB powered -- no external supply required) and the result is an impressive little system that’s portable in more than name only but sacrifices nothing in terms of performance. A marvel in itself, really.